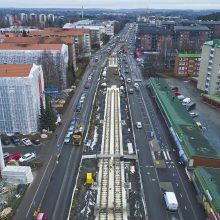 – Along Hämeenkatu, more tracks than were planned have been installed this year. Construction at the junction area site at Sammonaukio, as challenging as it has been, has also progressed faster than was originally expected,Tramway Alliance Project Manager Mikko Nyhä says.

By the end of November, 45% of the first phase of the tramway has been completed. Only 43% of the time scheduled for the project has been spent.

– The work completed this year has had a key role in the entire project staying on schedule, and so far we have been successful. The next phase of construction will have a solid foundation,Nyhä muses.

Cost of the tramway project remains within budget

The costs of the project are also as planned. The targeted cost for part 1 approved by Tampere City Council in October 2016 was approximately EUR 219.02 million. During the implementation phase, various additions to the project concerning e.g. urban construction and raised cost levels for the commissioner of a total of EUR 6.7 million have been approved. Additionally, Tramway Alliance has been commissioned for other street construction and sewage maintenance work adding up to a total of EUR 19 million. After these additions, the new cost estimate is approximately EUR 245 million.

– The tramway construction’s traffic arrangements and excavation sites also serve other urban construction projects, including the construction of the Hämeenkatu footpaths and edging and the construction of pedestrian and cycling paths along the southern side of Sammonkatu. These would have otherwise been implemented at a later time, but this way, the inconvenience caused to traffic and the surrounding area is minimised, Project Director for the Tramway Development Programme, Ville-Mikael Tuominen from the City of Tampere says.

In addition to surfacing work, some of the largest bridges for the tramway have been completed this year alongside Hervannan valtaväylä. The new Vacker underpass crossing Highway 9 as well as the Koivusenoja tramway bridge crossing the Hervanta canyon were completed late last summer. Next year, tracks and electrical structures will be installed for these bridges. Along Hervannan valtaväylä, the construction of the Hallinoja tramway bridge and the Lammelankallio and Taavetinkallio underpasses is underway.

During this past construction phase, structures relating to the electrification of the tramway line have also been implemented. In Turtola, along Hervannan valtaväylä, the first electricity supply station for the tramway has been completed. In total, there will be ten of these stations along the completed tramway line. Construction work for electricity supply stations is also well under way in Hervanta on Insinöörinkatu and the depot, along Hervannan valtaväylä in Hallila, in Liisanpuisto in Kaleva, on Tekunkatu and Rieväkatu as well as in the city centre on Itsenäisyydenkatu and Pirkankatu. The quantity and placement of the supply stations is such that the failure of one station does not prevent the continued operation of the tram cars. In addition to the electricity supply stations, electrical poles and combined electrical and lighting poles have also been installed in all construction segments. Other technical systems for the tramway including safety devices, traffic lights and other lighting have also been implemented.

Alongside the construction of the tramway line, Tramway Alliance will also implement over 11 kilometres of new or resurfaced pedestrian and cycling paths running parallel to the tramway line. Nearly half of these paths have now been completed. On Hämeenkatu, the pedestrian and cycling lane will be implemented as a separate project commissioned by the City of Tampere. Construction along Hämeenkatu has progressed furthest in the Tuulensuu quarter, and the tramway line running through the neighbourhood is already complete. Paving work will continue in the spring once temperatures go up.

Together with the construction of the tramway line, various green areas will also be implemented. Last summer, the Posteljooninpuisto park was completed with new flowerbeds and lawn areas. New greenery was also planted along Hervannan valtaväylä jointly with the completion of the supporting walls on the road’s northern side, the pedestrian and cycling paths and paving. The first trees along Hämeenkatu were planted in Tuulensuu in November. Over the past autumn, trees have also been planted in Kaleva in the Sammonaukio square as well in Hervanta along Hermiankatu. In June, seeds were planted in the trial structures for the future lawn tracks in Kaleva, and the best soil composition for the lawn tracks will be decided on next spring. New green areas in the form of lawn tracks will be implemented for a total track length of approximately 2.2 kilometres along four streets: Sammonkatu in Kaleva, Teiskontie and Tekuntie as well as Hermiankatu in Hervanta.

A tram car depot to be built in Hervanta

A hub for future tram traffic, construction of the Hervanta tram car depot is progressing according to plan. Construction work commenced in late July, and the first building constructed on the site was an electricity supply station. The construction of a tram car warehouse and a maintenance garage is currently underway. The depot has been planned to service tram traffic along phases 1 (City Centre–Hervanta–Tays) and 2 (City Centre–Lentävänniemi) of the tramway line. Two larger buildings will be constructed at the depot: a tram car warehouse and a combined maintenance, staff and office building. The depot area will also have a total of approximately three kilometres of electrified tramway tracks.

Tramway construction to continue in winter

Tramway construction will continue through the winter in all construction segments. Various temporary traffic arrangements implemented during construction have been removed for the winter to ease road maintenance and the flow of traffic. During the past year, construction work on the tramway has continued night and day to cause as little disturbance to traffic and road users as possible. Work is also performed during the night for safety reasons.

– Construction sites are now preparing for winter, and surfacing work in particular has been busy. As much of the road surfaces as possible will be covered with blacktop before winter. Work will pause over the Christmas holidays and recommence again right after New Year, Mikko Nyhä says.

Along Pirkankatu, work for the water and sewage line will continue between Pyynikintori and Sepänkatu, and an electricity supply station will be constructed in the Mirkka Rekola park. Road surfacing work has taken place adjacent to the Hämeenpuisto park. At the western end of Hämeenkatu, paving work will continue in the spring as temperatures rise. Installation of the foundations for combined electrical and lighting poles as well as for trees to be planted will take place between Kuninkaankatu and Aleksis Kiven katu during the winter. At the Central Square, cross-street water pipeline installation work will take place under Hämeenkatu. At the eastern end of Hämeenkatu, water pipelines and cabling will be installed between Koskikatu and Pellavatehtaankatu. The relocation of cabling and water pipelines at the Hatanpään valtatie and Hämeenkatu junction will commence early next year. At the eastern end of Hämeenkatu, bus traffic has moved to the centre lane and the relocation of cabling and water pipelines, installation of pole foundations and the planting bed for trees will continue along the sides of the road.

In the tunnel passing under the tramway tracks on Itsenäisyydenkatu, construction work for track foundations at the tunnel’s southern entrance as well as for supporting walls will commence over the winter. During December, car traffic will move to the northern entrance, and this arrangement will stay in place after the completion of the tramway line. The construction of an electricity supply station will also continue along Itsenäisyydenkatu adjacent to the Tullintori parking hall.

Towards the end of the year, the foundation structure of the tramway junction area at the Sammonaukio square will be reinforced with a pile slab. The slab track foundations will be installed along Teiskontie. On Sammonkatu, all junction areas have been completed and will become available for traffic once slab track installation for nearly the entire length of the street is completed by the end of the year. After New Year’s, sewage line work continuing into March will commence on Vieritie. The construction of an electricity supply station will continue of Rieväkatu.

In Hervanta, finishing touches are being put to the paving in front of the Duo shopping centre on Insinöörinkatu. The section of the road between Lindforsinkatu and Teekkarinkatu will become available for traffic before Christmas. Electrical installation work is underway at the Hervanta electricity supply station. In the Tohtorinpuisto park, ditch canalisation and soil profiling work, excavation, installation of layer structures, a bypass onto Ruskontie, relocation of cabling and bridge excavation work is continued. In the area surrounding Ruskontie, construction work for municipal engineering in the new Hervantajärvi housing area as well as work for the new underpass will commence. Earthwork will also take place in the future Makkarajärvenkatu area.

Earthwork as well as pipeline and cabling work in the Hervanta depot area will be wrapped up during the winter. Inside the warehouse, concrete track slabs are being cast, and during the winter, track installation and electrical work will be performed in the building. The warehouse floor will also be cast. In the maintenance building, work on element installations, roofs and floors as well as on storm drains and ventilation will continue.

Planning for the western section of the tramway line continues

Alongside the construction of the first phase of the tramway line, the Tramway Alliance continues to plan the western section of the tramway. In December of last year, Tampere City Council decided that the development of the tramway line’s phase 2 (Pyynikintori–Lentävänniemi) would commence, and that Tramway Alliance would be responsible for its planning. The tramway line is envisioned to run from Paasikivenkatu onto Rantatie, over a bridge across Paasikiventie into Hiedanranta, and from there on via Niemenranta into Lentävänniemi. The plans for the new phase also include a blind track running from Hiedanranta into Lielahti. The first street plan sketches for the western section (Sepänkatu, Paasikivenkatu, Rantatie, Federleynkatu and Kehyskatu) were presented in a public event on 28 November. After the public event and feedback, the street plans will be available for viewing, after which they will be submitted for the consideration of the Community Board.

The City Council aims to decide on the construction of phase 2 of the tramway line in October 2020 at the latest. In this case, construction would commence after the decision was made in late 2020 or early 2021, and tramway traffic would commence in 2024.
Information regarding the effects of the tramway construction work and traffic arrangements will be provided as the work continues in the affected areas in various channels of Tramway Alliance: raitiotieallianssi.fi, Instagram, Facebook, Twitter, YouTube.