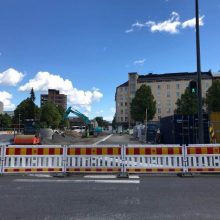 
Due to new phases of the tramway construction, traffic arrangements and routes on Pyynikintori and Pirkankatu will change significantly starting from week 26.