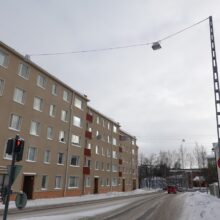 
Work to begin bridge demolition in the railway area on Sepänkatu will begin in week 13 on 28 March. The work will mostly be done at night when it is easier to schedule work between train traffic times. Night work will also be done on the nights between Friday and Saturday and Sunday and Monday. The work will cause noise disturbance for the nearby areas.

There won´t be any changes to pedesterian or cycling routes at this phase. Traffic arrangements will change again in the beginning of May, when traffic via Sepänkatu bridge will cease.

From week 13 until the end of May, preparations for the demolition of the Sepänkatu bridge will take place. This includes the building of a protective enclosure beneath the bridge to allow trains to operate as normal while the old bridge is being demolished and the new bridge is constructed.

For safety reasons, the building of the enclosure will mainly take place on weekday nights as this allows for the coordinated scheduling of work according to train times. Working hours have also been scheduled between train traffic times on nights from Friday to Saturday and Sunday to Monday. The aim is to do most of the work on weekday nights, and some planned nights may be taken off if the work progresses faster than anticipated.

Furthermore, night work will be done to demolish a signal portal and signal bridge in early May. This work will cause noise, and moving equipment may also cause changes to parking areas. Paasikivenkatu and Sepänkatu will periodically have to be closed during the night when construction workers are using a crane.

Traffic via the Sepänkatu bridge will cease in early May

Tramway work on Sepänkatu will continue later in the spring. During this time, traffic via Sepänkatu bridge will cease in early May. for the demolition of the old bridge and the construction of a new one. The bridge closure and its impact of the traffic arrangements will be announced in more detail closer to the beginning of the works.

The current bridge on Sepänkatu will be replaced by a new, wider bridge accommodating mixed traffic (tramway, motor traffic, pedestrians and cyclists). The new bridge will be up to 40 metres wide, while the width of the current bridge is 15 metres. The bridge work is expected to continue from May 2021 until the end of summer 2022.