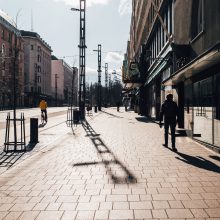 
The fourth year of construction of the Tampere tramway has begun according to plan. The construction work has proceeded on schedule, despite the coronavirus situation. In addition, the tramway’s first test drives in March and April, on the section between Hervanta and Turtola, were completed successfully.

– “Early spring brought completely unexpected challenges for the project, but the alliance model has enabled us to proceed flexibly according to the situation. Until now, there has been no significant impact. We are monitoring the virus situation closely and will take measures quickly, if necessary. The health and safety of the project’s personnel and stakeholders are a priority in everything we do,” says Pekka Sirviö, CEO of Tampereen Raitiotie Oy.

The fourth construction season of the Tampere tramway has begun as planned. Work is proceeding in all construction segments: the city centre, Hatanpään valtatie, Kaleva and the Hervanta area including Hervannan valtaväylä. Most of the Tramway Alliance’s track work was completed last year as well as street construction and earthworks conducted simultaneously with construction of the tracks. The tram car depot in Hervanta was also completed in December.

– “This year, most of the tramway’s street sections will be completed in order for everything to be ready to begin test traffic in a year. In addition to tramway works on Hatanpään valtatie and street construction on Hämeenkatu, the focus of the work will be in the installation of overhead contact lines, poles as well as technical systems, such as rail switches and traffic lights. Stop shelters will also be built for both bus and tramway stops,” says Sari Valjus, Project Manager of Tramway Alliance.

On Pirkankatu, the tracks are ready between Pyynikintori and Metso. This year, parts of the pedestrian and bicycle paths will be completed as well as surfacing of carriageways and cleaning of green areas.

In Hämeenpuisto, the work is currently focused on the future district cooling lines’ plumbing works, which should be completed before the street surfaces. Once the district cooling work is completed, the missing traffic islands and pavement will be installed in front of Metso. Tramway Alliance will build the tramway tracks and conduct the street construction of junction areas in Hämeenpuisto. The city will finish the Hämeenpuisto area separately, at a later time.

On Hämeenkatu, street construction and paving work will continue on both sides, at different locations between Kuninkaankatu and Aleksanterinkatu. The last section of tramway on Hämeentie is on Hämeensilta, which will be completed by the end of the summer.

The Rautatienkatu, Hämeenkatu and Itsenäisyydenkatu junction will have street construction and surfacing completed during the year.

On Itsenäisyydenkatu, the tramway tracks have been completed. The southern carriageway and pavement between Yliopistonkatu and Kalevan puistotie will be completed by the end of the year. In addition, pedestrian and bicycle sections, carriageway surfacing, paving of the Attila supporting wall will be wrapped up and green areas cleaned. Protective roofing will be constructed for the tunnel passing under the railway, making it possible to renovate the bridge at a later time, without disturbance to tramway traffic.

In addition, many overhead contact lines and technical systems will be installed in the city centre.

Hatanpään valtatie tramway construction is planned to be conducted in four phases in 2020–2022. The section between Hämeenkatu and Suvantokatu will be completed first and the goal is to begin tramway and bus traffic on this section in 2021. The other main goal for the schedule is to complete the entire Hatanpään valtatie tramway, including the tramway stop at Sorin aukio and the switches at the bus station, by the end of 2021.

The first phases of work on Hatanpään valtatie included transferring cables and pipes out of the way of the tracks. This work will be continued until May simultaneously at many locations. The water insulation of the Otavalankatu tunnel has been renovated at the same time. An underground electricity supply station for the tramway is being constructed next to the bus station.
Construction of the tramway foundations and surface structures will begin in April, which means that the installation of slab track and rails will begin in many locations in the early summer.

On Rieväkatu, Teiskontie and Sammonkatu, adjustments of the overhead contact lines will be finalised during the spring. Some of the work will be conducted during nights and traffic supervisors will be used, as necessary.

At the Tekunkatu/Kuntokatu section, the tracks are ready up to the stop at Tampere University Hospital. Planting of grass on both sides of the bridge over Kekkosentie will begin in May. The missing overhead contact lines will be installed by the end of the year.

Landscaping on Hervannan valtaväylä as well as the large tramway bridges along the road are ready. Overhead contact lines will still be installed and adjusted this year. Installation of railings for the pedestrian and bicycle path “Hervannan Baana” will be finalised during the spring.

In Hervanta, the rest of the surfacing of the pedestrian and bicycle paths on Insinöörinkatu will be completed this year. Finishing touches to the surroundings of the Tohtorinpuisto electricity supply station will be done simultaneously. Work on the bridge’s trough plate has already begun in the area of Makkarajärvenkatu. Later in the spring, the ballast track section will be finished and planting of grass along the tramway will begin. The Hervantajärvi tramway stop will be constructed and electrical poles in the Makkarajärvi area will be erected this summer. The tramway between Tohtorinpuisto and Makkarajärvenkatu will be completed by the end of the year.

The Tramway Alliance is currently engaged in planning the construction of part 2 of the tramway (Pyynikintori–Lentävänniemi and Lielahti). As part of the development phase, the Tampere City Board decided on 20 April 2020 on the principles for dividing the work into phases. Construction of the tramway west of city centre can be done in two phases. In October 2020, the City Council will decide on continuing the tramway from Pyynikintori to Lentävänniemi so that construction would start with section 2A from Pyynikintori to Santalahti and continue with section 2B from Santalahti to Lentävänniemi, once the permits for the Näsijärvi fill are legally valid. In this case, construction of part 2A would commence after the decision is made in late 2020 or early 2021.

Part 2 of the tramway runs along Sepänkatu up to Paasikivenkatu and from Rantatie to Hiedanranta. From there, the line continues along Lielahdenkatu via Federleynkatu and Kehyskatu to Halkoniemenkatu, where the part 2 terminus is located in Pyhällönpuisto. Nine stops have been planned for the line and part 2 of the tramway will have a total of four electricity supply stations.