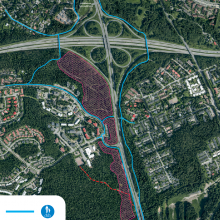 
The excavation work related to the construction of the tramway along Hervannan valtaväylä will commence during week 3. The work will begin on the portion between Pehkusuonkatu and Hervanta, where rock will be excavated along the tramway route. The excavated material will be transported northward to Suutalanahde in the Korkinmäki area. The work will last several months.

Due to the excavations and site traffic, traffic arrangements have been made in the area for pedestrians and cyclists, as well as for vehicle traffic on Hervannan valtaväylä. For safety reasons, during the blasting work, vehicle, pedestrian and cycle traffic will be stopped by traffic supervisors during the blasts. A loud siren will give a warning before blasting.

The Suutalanraitti cycling route located in the Vackerinpuisto area between Highway 9 and Pehkusuonkatu will be closed, and cycling traffic will be directed westward via a detour. The detours are indicated with various signs in the environment and the construction site area is restricted.

During the work, the cycling route and pavement between Pehkusuonkatu and Kanjoni will be redirected along Hervannan valtaväylä and separated from the motorway by a precast concrete rail.  The shoulder will be extended so that cyclists and pedestrians can fit safely. The bus stops in the area will remain in their normal locations, but access to them will be slightly modified.