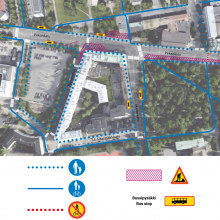 The moving of the construction site to the junction of Pyynikintori and Pirkankatu will affect driving routes slightly. In the site’s impact area, the speed limit will be 30 kilometres per hour.

The moving of the sewage line will continue between Pyynikintori and Sepänkatu in the spring. The work is estimated to take about 3–4 months. Information on the effects on traffic will be made available as the work progresses.