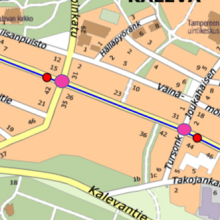 
From week 9 onwards, the tramway construction work on Sammonkatu will cause some new traffic arrangements on the Kaalamonaukio–Kaupinkatu–Tursonkatu section. During the spring, the tramway construction work will proceed to the middle section of Sammonkatu and motor traffic will be directed to frontage roads.
In the next few weeks, roadworks will also be continued on the southern edge of the street in front of the Teboil service station at Sammonkatu 42.

On Kaalamonaukio, district heating work will be carried out and cross-street water and sewer pipes will be installed under Sammonkatu. The work site will be located in the middle section of the street and motor traffic will be directed to frontage roads. In late March, pile driving will also begin in the middle section of the street, causing some noise disturbance in the nearby areas.

In the section near Kaupinkatu, district heating work will be started, weather permitting, and the pedestrian crossing at the junction will be moved slightly. Ramps will be arranged for motor traffic over the district heating excavation area.

At the Tursonkatu junction, the excavation work of the future track foundation has been started in the middle section of the street. Eastbound motor traffic from the junction will be directed to the newly completed street area on the southern side of Sammonkatu. On the northern side, traffic will run on the frontage road.
Near the work sites, the speed limit will be 30 kilometres per hour. The work at the junctions will last several weeks.