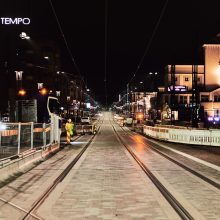 The installation of the tracks for the Tampere tramway from Pyynikintori to Hervanta and from the Tays University Hospital to Hatanpään valtatie has been completed. The last rail section was installed at the junction of Hatanpään valtatie and Hämeenkatu as a curve rail.

The double-track tramway now spans a total of 15,700 metres. In addition to the rail installation, the slab elements holding the rails will be completed in the very near future.

– “This is a historic moment. The track work we are about to finish is the most important part of the first step in the Tampere tramway project,” says Project Manager Sari Valjus from Tramway Alliance.

Over the course of three and a half years, the Tampere tramway has been built faster than expected and the track work has been carried out earlier than planned. All in all, 90% of the original tramway plan (city centre–Hervanta–Tays) has now been completed and the work is proceeding ahead of schedule. According to the current estimate, the project will be EUR 26 million under the expected cost of part 1. At Hatanpään valtatie, 46% of the tramway work has been completed and the construction is proceeding according to plan.

In November 2019, Tampere City Council decided to extend the tramway to Hatanpään valtatie. The decision added about 700 metres of double-track tramway to the original plan (Pyynikintori–Hervanta–Tays).

– “The last rail section was installed at the junction of Hatanpään valtatie and Hämeenkatu. The positioning of the rail made the section quite challenging, but the work was successfully completed. After concreting, the track will be finished with a granite sett surface structure,” says Valjus.

Functionality of the Tampere tramway tested in trial runs

In Tampere, the tramway line is made of either ballast track or slab track, coated with grass, paving or asphalt. In the city centre, Kaleva and Hervanta, the tramway primarily consists of concrete slab track holding the rails. At Hervannan valtaväylä and some sections in Kaleva and Hervanta, the tramway has been constructed as ballast track. The tram depot in Hervanta features both track types along its approximately four kilometres of tramway. The different track types have already been tested in trial runs between Hervanta and Tammela.

– “The trial runs have included testing the handling of the tracks and switches and the positioning of the carriages in relation to the tramway. We haven’t found any major issues, meaning that the tramway is working as planned and coordinating well with the carriages,” says Head of Superstructure Timo Kuusela from Tramway Alliance.

According to Kuusela, the three-and-a-half–year tramway project has been a thoroughly successful operation.

– “Reaching this goal is an exceptional feat for all the teams whose cooperation skills have been outstanding. The pace has been quick, but the processes have been honed to perfection, and we’ve also seen a number of innovations when building this track. It wouldn’t be an exaggeration to say that, at this moment, Tampere can boast some of the leading expertise in tramway construction. Being involved in this historic project has been a wonderful experience,” says Kuusela.

The first rails of the Tampere tramway were laid on 18 May 2017 at the junction of Insinöörinkatu and Kanjoninkatu in Hervanta. The last rails of Hämeenkatu were laid on the Hämeensilta bridge three years later on 20 May 2020.

In addition to superstructure work, the tramway project has included the installation of electric transportation structures, in other words, electric pylons and overhead contact lines as well as a number of other technical systems, such as traffic lights and safety devices. The next trial runs in the city centre will take place on Hämeenkatu and Pirkankatu in November. Tampere residents may be able to see multiple trams operating at the same time as the trial runs will include double-carriage testing as well.

The rail is the single most important component in a tramway. It carries the weight of the carriage and distributes it to the sleepers or slabs underneath the rail. In addition to carrying the carriage, the rail provides a level passageway for the wheels of the carriage, guiding their movement. The service life of a rail depends on several factors, including the quality of the steel used for the rail. The mechanical characteristics of the rail can be influenced using different manufacturing processes. The Tampere tramway uses two types of rails: channel rail and vignole rail. The largest difference between the two is that channel rails have a groove for the flange of the tramway wheel.

The superstructure of the tramway consists of a supportive layer and the track. The supportive layer is made of either concrete or crushed stone. This keeps the track in the correct position, distributes weight and forms an even, load-bearing foundation for the track.