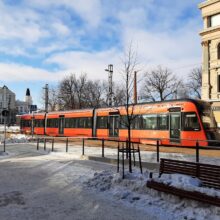 – Tramway traffic will begin on Hatanpään valtatie on 9 August, i.e. earlier than planned. According to original plans, the tramway at the section of Hatanpään valtatie was scheduled for completion in its entirety by the end of this year. ”According to the cost forecast, we will also remain below the target cost set for the project by approximately EUR 30 million,” says Sari Valjus, Project Manager, Tramway Alliance.

Construction work on section 2A (Pyynikintori–Santalahti) is proceeding according to plans. The lake fill permit for construction work on Näsisaari in section 2B Santalahti–Lentävänniemi is still being processed. Vaasa Administrative Court rejected the earlier appeal concerning the lake fill. However, Tampereen Ympäristönsuojeluyhdistys has applied for permission to lodge an appeal to the Supreme Administrative Court concerning the decision. The commencement of tramway work between Santalahti and Lentävänniemi is waiting for a final decision on the matter.

– At section 2A, the most visible stages this year will be the construction of a new overpass bridge in Santalahti and the refurbishment of the Sepänkatu bridge, due to which Sepänkatu will be closed to through traffic at the beginning of May.

All work on Hämeenkatu will be completed in the summer

Thanks to the warmer weather, the work has also started on Hämeenkatu.

– We have started final street construction work at the eastern end of Hämeenkatu at the Aleksanterinkatu junction. The work areas at Keskustori have already been fenced and the foundation work has been started. Actual paving work will begin next week. ”The whole of Hämeenkatu will also be completed ahead of schedule in the summer, as the street construction work was originally supposed to be completed next year,” Valjus says.

In addition to tramway construction work, Tramway Alliance has also rebuilt all structures on Hämeenkatu, i.e. underground municipal engineering as well as street space and paving according to the street plans. Paving work will be performed at Keskustori during the spring and summer. Traffic light installations and paving work will be performed at the south junction of Aleksanterinkatu and Hämeenkatu. The area will be finished now when the bus detour via Aleksanterinkatu is no longer needed. Hämeenkatu will be completed in its entirety in the summer before tramway traffic begins in August.

In spite of the coronavirus situation, the construction of the tramway has proceeded ahead of schedule. Test drives arranged to test the tramway infrastructure have also been completed according to plans.

– So far, the coronavirus situation has not impacted the progress of the work, and authorities’ instructions and safety regulations have been taken into consideration precisely during the project. “The virus situation is constantly being monitored and we will take action quickly, where necessary. The health and safety of the personnel and the project stakeholders is a priority in everything we do,” Sari Valjus points out.

On Itsenäisyydenkatu, the concrete structure work for the Attila supporting wall has been completed and the paving work and tramway stop shelter installation work is in progress, which will be completed in the middle of May.

Traffic light installations and paving work will be performed in several phases at the south junction of Aleksanterinkatu and Hämeenkatu. The work is in progress and will be completed in early June. The work will cause changes to pedestrian and bicycle traffic in the area, though access to properties and stores will be ensured in all stages of the work.

Paving work will be performed at Keskustori from week 16 onwards, which will result in occasional changes to pedestrian and cycling routes. There will be no bus traffic on Aleksis Kiven katu from the beginning of June when street restoration and paving work will begin. Aleksis Kiven katu was used as a bus detour for a long time when west-bound bus traffic was directed away from Hämeenkatu due to the tramway construction work.

Paving work will be performed, cables directed into pipes and land masses changed in pedestrian areas at the junction of Hämeenkatu and Hatanpään valtatie from week 17 onwards. Minor changes may be made to pedestrian routes due to the work.

Waterproofing in the Otavalankatu tunnel between Verkatehtaankatu and Suvantokatu has been completed and work such as directing cables into conduits will continue in the area in the spring. In addition, pavement and bicycle path structural layers as well as paving beside properties will be completed at the section during the spring. Paving work will start in May, continuing until July. In addition, carriageways and bicycle paths will be asphalted ready during the summer.

The building of a supporting wall in the yard of the electricity supply station in front of the bus station will begin with moulding and reinforcement work at the end of April. In addition, surface finishing in the yard area as well as tramway driver toilet building installation work will be performed in the area. Bus stops will again be installed in front of the bus station in May–June, and bus traffic will recommence there.

Overhead contact line installation work will also be continued on Hatanpään valtatie until the end of June. Installations will occasionally also be performed at night, so traffic may have to be stopped and traffic supervisors will direct it past the site of the work. The work will be carried out using an elevating work platform that also moves beside the property walls.

Water supply maintenance work will be continued on Pirkankatu and traffic will move around the work area according to work stages. Street building work will be completed to the south of Pirkankatu in the spring. The work will cause occasional changes to the location of pedestrian routes. Street construction work to the north of Pirkankatu will be started in June after completion of work to the south of the street. This work, too, will cause lane changes to car traffic as well as the need to relocate pedestrian and bicycle routes. Street construction work on Pirkankatu will be completed in late summer.

Water supply maintenance work will be continued on Sepänkatu between Pirkankatu and Satakunnankatu. Preparations for the demolition of the Sepänkatu bridge will take place in the railway area beneath the bridge until the beginning of May. This includes the building of a protective enclosure beneath the bridge to allow trains to operate as normal while the old bridge is being demolished and the new bridge is constructed. For safety reasons, the building of the enclosure will mainly take place on weekday nights as this allows for the coordinated scheduling of work according to train times.

Monday 3 May Tramway Alliance will start the demolition of the Sepänkatu bridge and, after that, the building of the new overpass bridge. This will also involve closing Sepänkatu to traffic for approximately 15 months. At that point, the section of Sepänkatu between Pirkankatu and Satakunnankatu will also be closed to traffic, i.e. Sepänkatu will be closed on both sides of the Satakunnankatu junction. During the work, access to the properties and service traffic on Sepänkatu will be ensured at all stages of the work. The new bridge will be completed on Sepänkatu in the summer of 2020, at which point traffic passing via the bridge will return to its route. More information on the bridge work on Sepänkatu as well as its impact on traffic will be available in week 17.

The first tramway rails of section 2 will be mounted on Sepänkatu during the summer. Surface structure work is estimated to begin in July.

Building of the Santalahti overpass bridge will continue on Paasikiventie. Bridge reinforcement work will begin in May and casting will take place in the summer. Bridge crossing beams will be lifted into place at night in weeks 16 and 17, which will cause occasional lane changes. The bridge work will be completed at the end of the year. The new overpass bridge over Rantatie, Paasikiventie and the tramway will be an unobstructed pedestrian and bicycle route more than twice as wide as the existing one.

The telematics centre and portals in Rantatunneli will be relocated on Paasikiventie at night in week 17, and will take about one week. Due to the relocation work, the tunnel signposts will be out of use between Vaitinaro junction and Paasikivenkatu underpass bridge. The speed limit in the tunnel will be 60 km/h during the work, as determined by Fintraffic. Systems will continue to be in operation in the tunnel and to the east of it.

Work on building the two supporting walls on Rantatie are close to completion and will be finished during the spring. At the end of May, car traffic at the eastern end of Rantatie will be relocated to the future tramway area, and street construction work will begin on Rantatie. Traffic arrangements and lane changes will also be organised made at the western end.