The tramway construction works will begin on Sepänkatu in week 11 (15 March). The works will start from the section between Pirkankatu and Satakunnankatu. The first stage is to lay the storm water pipeline and transfer other cablelines and pipelines on the eastern side of the street. The work in this street section will continue until the summer of next year.

The work will cause traffic arrangements in the nearby areas. At this point, the street will be narrowed to two lanes on the western side with one lane for each direction. Pedestrians will be directed onto the western side of the street. The pedestrian crossings on Sepänkatu will remain in their normal locations. The cycling traffic between Pirkankatu and Satakunnankatu will be diverted, for example, through the northern side of Pirkankatu to Tipotie and Satakunnankatu. Access to the properties and service traffic on Sepänkatu will be secured at all stages of the works. 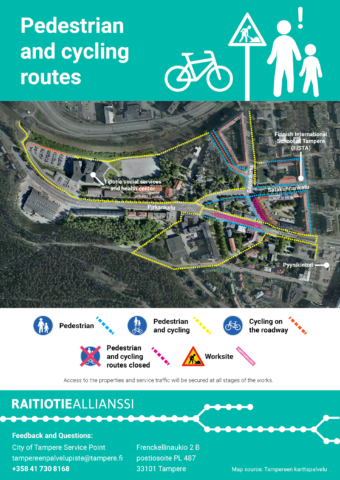 The tramway works on Sepänkatu will continue at a later stage in the spring so that the Sepänkatu bridge will be closed for traffic from early May for the demolition of the old bridge and the construction of a new one. The section between Pirkankatu–Satakunnankatu will then also be closed to vehicle traffic. The closure of the Sepänkatu bridge and its street area and their impact on the traffic arrangements will be announced in more detail closer to the beginning of the works.

The current bridge on Sepänkatu will be replaced by a new, wider bridge accommodating mixed traffic (tramway, motor traffic, pedestrians and cyclists). The new bridge will be up to 40 metres wide while the width of the current bridge is 15 metres. The works are expected to continue from May 2021 until the end of summer 2022.