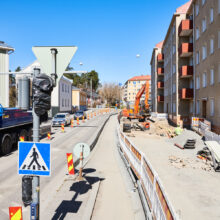 
On Monday 3 May, the Tramway Alliance will start the demolition of the Sepänkatu bridge and, after that, the building of the new overpass bridge. This will also involve closing Sepänkatu to traffic and establishing alternative routes for approximately 15 months, as well as removing from use the roundabout between Sepänkatu and Paasikivenkatu. The section of Sepänkatu between Pirkankatu and Satakunnankatu will also be closed to traffic, i.e. Sepänkatu will be closed on both sides of the Satakunnankatu junction. In addition, there will be changes affecting pedestrians and cyclists. During the construction, access to the properties and service traffic on Sepänkatu will be ensured at all stages of the work. The new bridge will be completed on Sepänkatu in the summer of 2022, at which point traffic passing via the bridge will return to its route.

Alternative routes for drivers during the bridge construction

During the bridge construction, westbound car traffic can use Rantatunneli as well as an alternative route via Hämeenpuisto and Paasikivenkatu, which will indicated with signs. For those heading west from Lempäälä, other available routes are Ratapihankatu and Kalevan puistotie, which connect to Rantatunneli. From Mariankatu, westbound car traffic will be directed via Kortelahdenkatu to Paasikivenkatu. The aim is to direct private car traffic to these routes in order to ensure smooth public transport along Pispalan valtatie during the exceptional arrangements. Due to the construction of the tramway and the bridge, Satakunnankatu and Pirkankatu can be used but the traffic arrangements in the areas surrounding the Sepänkatu junctions will change.

Using Rantatunneli is recommended for eastbound car traffic. Alternative routes both eastward and westward will be established for the annual maintenance of Rantatunneli and any possible exceptions. Driving access from Paasikivenkatu towards Ranta-Tampella is intended as an alternative route for high transport during exceptions.

There will be signs both on city streets and on the entry roads to remind people about the closure of Sepänkatu and the alternative routes.

During rush hour, Satakunnankatu, Pirkankatu, Pispalan valtatie, Itsenäisyydenkatu, Aleksanterinkatu and Rautatienkatu should be avoided. Traffic may also slow down in Hämeenpuisto during rush hour. The altered traffic arrangements on Hatanpään valtatie related to tramway construction continue.

Closure of Sepänkatu causes changes to traffic arrangement affecting pedestrians and cyclists, which will be indicated with signs in the area. Pedestrian traffic on Sepänkatu will be directed past the construction site and access to the premise will be ensured at all stages of the work. There will be pedestrian crossings at regular intervals and they will be equipped with either hazard beacons or traffic lights. The light-controlled pedestrian crossing at the junction of Sepänkatu and Satakunnankatu will be moved about 20 metres east along Satakunnankatu, where it will remain during construction of the tramway.

Bus lines that used go along Sepänkatu have been on an alternative route via Hämeenpuisto and Paasikivenkatu since January. Once the bridge work is finished in summer 2022, the bus lanes can return to Sepänkatu, as necessary. There will be no changes in bus lines heading straight along Satakunnankatu or Pirkankatu, but they will pass through the construction area at the Sepänkatu junctions, which can cause occasional delays to bus traffic. Bus lines on Paasikiventie (main road 12) and Paasikivenkatu may be slower than usual due to speed limits related to the construction site.

Night work at the tramway area in early May

At the very start of May, night work will be carried out also in the tramway area close to Sepänkatu on the weekends (8–9 May and 15–16 May). The work is related to the demolition of the signal portal and signal bridge. This work will cause noise, and moving equipment may also cause changes to parking areas near the construction site, at the northern end of Peurankallionkatu and Näsijärvenkatu. All access between Näsijärvenkatu and Kankurinkatu will closed during the night of 8–9 May. Similarly, the area around the Peurankallio and Savilinnankatu junction will have to be closed during nights on 15–16 May. During this time, pedestrian access will also be limited in these areas.

The new Sepänkatu bridge will be wider than the current one

The current bridge on Sepänkatu will be replaced by a new, wider bridge accommodating mixed traffic (tramway, motor traffic, pedestrians and cyclists). The new bridge will be up to 40 metres wide, while the width of the current bridge is 15 metres. The bridge work is expected to continue from May 2021 until the end of summer 2022.