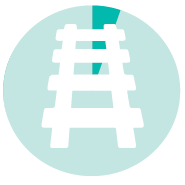 
Construction of part 1 of the Tampere tramway, Hervanta–Pyynikintori–TAYS, is under way in all five segments: the city centre, Kaleva, Hervannan valtaväylä, Hervanta and the property of the future depot.

The first year of construction has gone fully according to plan, both for the degree of completion, costs and working hours, says Mikko Nyhä, Project Manager, Tramway Alliance.

The most visible part of the tramway, the track, has already been installed on several streets: on Hämeenkatu and Itsenäisyydenkatu in the city centre and on Kanjoninkatu, Insinöörinkatu and Hermiankatu in Hervanta. In addition, there are rails and slab tracks on Hervannan valtaväylä, on the Nekalantie slip road.

Roughly half of this year’s track project has been completed. The curved track section leading from Sammonaukio to Sammonkatu, the switch area on Atomipolku in Hervanta and the tramway stop on Hervannan valtaväylä in Turtola will still be completed this autumn. All in all, 15 km of double track and 3 km of depot track will be completed in part 1, says Nyhä.

During the first year of the tramway construction, a large amount of cables and pipelines were moved from underneath the future track.

Waste water lines and cables have been moved in all segments, as well as changes made to the water maintenance lines. In addition to this, district heating work has been carried out on Pirkankatu, Tuomiokirkonkatu, Itsenäisyydenkatu, Sammonkatu, the corner of Insinöörinkatu and Atomipoku and on Hermiankatu.  There have also been changes made to the natural gas and district heating line on Hervannan valtaväylä. A brand new storm water pool was also built in Posteljooninpuisto at the junction of Rautatienkatu, which will prevent storm water from flooding the station tunnel in the future. A new storm water line is also under construction in Hämeenpuisto.

Bridges modified and retaining walls built for the tramway

Tramway cost at the planned level

The targeted cost for part 1 of the tramway approved by Tampere City Council was EUR 219.018 million. The project content has been specified during the implementation stage, and the targeted cost is now EUR 219.521 million.

The cost of the tramway is at the planned level. Currently, the work is 12% complete and 18% of the project time has been used, explains Ville-Mikael Tuominen, Project Director of the tramway project.

For example, the roads and pavements on Sammonkatu and at Sammonaukio have been improved in accordance with the street plan. On Hämeenkatu, the Tramway Alliance aims to build the roads as well as the pavements in the Tuulensuu block, from wall to wall, as it were. Separate decisions shall be made later with regard to the other blocks of Hämeenkatu, Ville-Mikael Tuominen says.

According to the city’s wishes, some of the street and road areas are built more extensively than required by the construction of the tramway because implementing several projects at the same time saves time, lowers the potential total cost in the future and also reduces the interruptions caused by the work.  It is for the same reason that the Tramway Alliance refurbishes and renews the water supply network when moving cables and pipelines.

Tramway construction to continue in winter

The tramway construction will continue at several locations during the winter period. The construction work includes several work stages which can be carried out regardless of the winter conditions.

On Pirkankatu, a waste water sewer will be built between Pyynikintori and Sepänkatu starting approximately on week 49.  On the south edge of Pirkankatu between Mariankatu and Mustalahdenkatu, on the other hand, the transfer and renewing of cables and pipelines will carry on as will the construction of cable routes, the transfer of pavement stones according to the street plan and the preparation of the track foundation. The work will continue throughout the winter period depending on the weather conditions.

On Hämeenkatu in the Tuulensuu block, paving work will carry on inside a mobile tent where the temperature can be kept at the level required by the work. Cable and pipeline work will be carried out between Näsilinnankatu and Kuninkaankatu on the north edge of Hämeenkatu. For example storm water sewers, cable routes and pipework will be renewed in the area.  The foundation for the future tramway track will also be prepared. Weather permitting, similar work may also commence on the south edge of the street in the same section. Depending on the weather, the work on Hämeenkatu will continue till the end of the year.

When the refurbishment of Hämeensilta by the Tramway Alliance begins early next year, the water pipeline alteration work between Hämeensilta and Keskustori may start at the same time. The timing of the work will  be specified later. It is also dependent on the work method used for refurbishing Hämeensilta.

The construction of a water pipeline on the south edge of Hämeenkatu at the east end of the street will start before the end of the year, weather permitting. The work area includes the three easternmost blocks along Hämeenkatu.

On Itsenäisyydenkatu, pipelines and cables will be transferred in the tunnel going under the railway during the winter. Practically all important water and sewer pipes in Tampere travel under the tunnel as well as a large amount of various data transfer cables, which must be moved ahead of the tramway work. New lines and routes will be created partially by excavation.

A sewer line will be moved at the corner of Itsenäisyydenkatu and Tammelan puistokatu from under the future track. The work is estimated to continue until the end of November.

At the east end of Itsenäisyydenkatu, on the north edge of the street, a slab track slab may be constructed during autumn and winter if the weather conditions permit it. The goal is to complete the Salhojankatu–Kalevan puistotie section during the autumn and to continue the work west from Salhojankatu, weather permitting.

In Sammonaukio and Sammonkatu, the tramway foundation will be reinforced between Sammonaukio and the west end of Sammonkatu during winter, starting early in November.  Traffic on Sammonkatu will be directed to both sides of the construction site during the work.  The temporary traffic arrangements in Sammonaukio will remain the same for the time being.

On Teiskontie, the transfer of a sewer line planned for next year has already been carried out.  The cutting of a water pipeline by drilling will commence in the junction of Ilmarinkatu near the ABC petrol station approximately on week 49. Construction of the retaining wall near TAYS on Teiskontie will be completed by the end of November.

The light traffic route following Hervannan valtaväylä via Rieväkatu will return to use during the autumn. The exchange of excavated soil will take place on Rieväkatu during winter. The work will have no significant impact on traffic on Rieväkatu.

All retaining walls, stairs and railings will be completed this year in the north part of Hervannan valtaväylä. The track foundation between Rieväkatu and Vuohensillankatu will reach a stage where crushed stone can be spread on it. The crushed stone track section of Hervannan valtaväylä will only be implemented once all bridges in the section have been completed, approximately in summer 2019.

On Insinöörinkatu, sewer and water pipelines will be constructed between Orivedenkatu and Opiskelijankatu during the autumn. In addition to this, a water pipe will be moved on the street in front of the Duo shopping centre between Lindforsinkatu and Ahvenispolku. Comprising an approximately 200-metre section, the work will continue until early next year.

A switch installation is planned to take place in the Atomipolku junction on Insinöörinkatu. The work may be carried out inside a heated tent to ensure correct installation temperature.

The track foundation excavation work will continue during the winter on Hermiankatu. The goal is to make Hermiankatu wider and then move traffic to the widened section so as to be able to continue moving cables and pipelines and the construction of the track foundation on the north edge of the street. Water pipe work may take place in the junction of Hermiankatu and Hervannantie.

Next year the busiest year of construction

2018 will be the busiest year of tramway construction. The aim is to build 5 km of completed double track, to continue bridge, street and road construction and to wrap up the transfer of cables and pipelines.  For example, the objective is to build all of the rails on Sammonkatu during next year.

Special attention will be paid to traffic arrangements during the work, and they will be designed by several experts. The work will be shared by the constructors of the tramway, the City’s street space control and traffic engineers, the designers of traffic arrangements during the work and Tampere Regional Transport operators. The mutual goal is to ensure the smooth running of everyday city life also during the construction of the tramway.
Specific information regarding the effects of the tramway construction work and traffic arrangements will be provided as the work continues in the affected areas, on Ratikka-Nysse and in the different channels of the Tramway Alliance: raitiotieallianssi.fi, Instagram, Facebook, Twitter, YouTube.