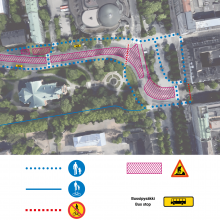 
As the construction of a tramway through central Tampere progresses, traffic arrangements on Pirkankatu, Hämeenkatu and Rautatienkatu as well as in Hämeenpuisto will change starting from week 27.

In the future, southbound traffic from Hämeenpuisto across Pirkankatu will be required to give way to traffic from Pirkankatu. The tramway construction in the area of the junction will continue for several months.

Changes to lanes on Rautatienkatu